While attempting to save the northern white rhinoceros from extinction through advanced assisted reproduction technologies, the scientists and conservationists of the BioRescue consortium place the highest value on respecting the life and welfare of the individual animals involved. In a special, in-depth ethical risk assessment, the team has reached the decision to retire the older of the two remaining females, 32-year-old Najin, as a donor of egg cells (oocytes). This leaves the ambitious programme with just one female that can provide oocytes, Najin’s daughter Fatu.

Weighing up risks and opportunities for the individuals and the entire species rendered this decision without an alternative. This situation will further strengthen the need for stem cell associated techniques, which are also part of the BioRescue mission as well as long-term biobanking. Najin will remain an important part of the mission as an ambassador for her kind and by transferring social knowledge to future offspring. 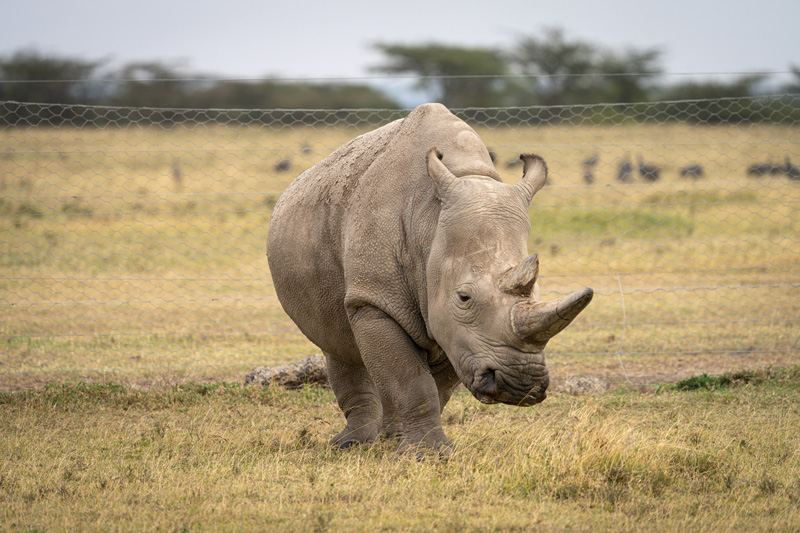 Najin was born in Safari Park Dvůr Králové (Czech Republic) in 1989 and was moved to Ol Pejeta Conservancy (Kenya) along with three other northern white rhinos in 2009 for a natural breeding programme. Five years later, scientists established that the last chance to survive for Najin and her kind lies in advanced techniques of assisted reproduction conducted by the BioRescue consortium. This approach relies on collecting oocytes from female northern white rhinos, which involves hormone stimulation, full anaesthesia and transrectal ultrasound-guided oocyte retrieval.

“In rhinos this procedure is absolutely new and although it is performed by the world-leading scientists and veterinarians from the BioRescue team in the most professional and reassuring manner, there are risks involved for the animals”, says Jan Stejskal, director of international projects at Safari Park Dvůr Králové.

“Oocyte collections in Najin have yielded only few eggs and none of them could be fertilised successfully to become an embryo. Weighing this outcome with potential risks, it is the most responsible decision to cease any further intervention on Najin and to stop using her as a donor of oocytes. She will remain a part of the programme, for example by providing tissue samples for stem cell approaches, which can be performed with minimal invasion.” 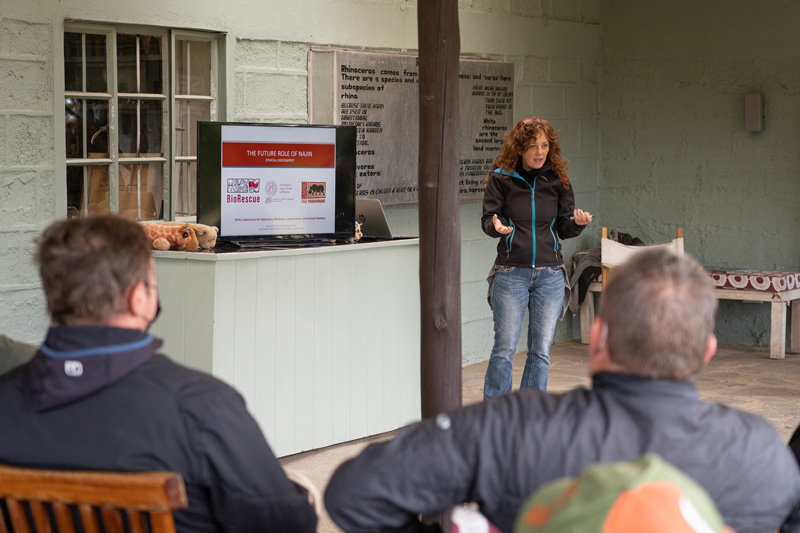 This decision to stop the oocyte collection from Najin was reached under the guidance of the Ethics Laboratory for Veterinary Medicine, Conservation and Animal Welfare of Padua University. Prof Barbara de Mori and her team came to this recommendation after analysing all relevant ethical dimensions and desiderata, as well as conducting several moderated discussions with all stakeholders involved.

Furthermore, they evaluated all the possible options using scientific methods such as decision trees and Bateson’s cube to back the expertise of the people involved with a systematic, objective perspective.

“It was especially challenging to evaluate the importance of maximising the chances to save a species against the welfare of one individual animal”, says Prof Barbara de Mori. “We identified the main choices and the combinations of decisions the consortium could make and then ranked them in light of desiderata such as avoiding major or minor accidents, the opportunity to repeat procedures and the successful harvest of oocytes”, adds Dr Pierfrancesco Biasetti, scientist at Leibniz Institute for Zoo and Wildlife Research (Leibniz-IZW) and member of the Ethics Lab at Padua University.

Some scenarios turned out to have high probabilities of satisfying most of the desiderata whereas others have rather low chances to do so. This approach confirmed that under the given circumstances a continuation of the oocyte harvests or other potential options such as ovariectomy (to obtain biomaterial potentially valuable for future in-vitro procedures) are not ethically acceptable choices.

From the very beginning, it has been a pivotal component of the work of the BioRescue project and its partners in the northern white rhino rescue mission to consider all relevant ethical aspects of interventions. 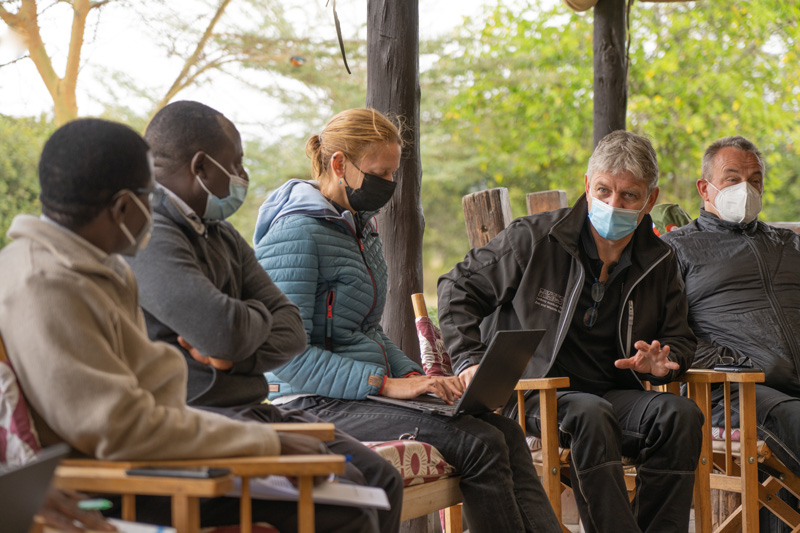 “We are well aware of the fact that we are pushing the boundaries of what is do-able in conservation and that this requires us to also think about ethical and moral implications”, says BioRescue project head Prof Thomas Hildebrandt from the Leibniz Institute for Zoo and Wildlife Research (Leibniz-IZW). “Every procedure of the programme is accompanied by a full ethical risk assessment and we are convinced that we should not do anything we could do just because we can. Developing clear ethical principles based on our knowledge, scientific

expertise in animal welfare ethics and decision making, and a vigilance towards societal discourse is a fundamental basis of BioRescue.”

“Retiring one individual from a conservation programme because of animal welfare considerations is usually not a question to think about for long”, say Leibniz-IZW head veterinarian Dr Frank Göritz and Ol Pejeta head veterinarian Dr Stephen Ngulu. “But when one individual is 50 percent of your population, you consider this decision several times because it has significant impact on the prospects of the conservation programme. Recent ultrasound examinations have revealed multiple small, benign tumours in Najin’s cervix and uterus as

well as a large cystic structure 25 cm in diameter in her left ovary. These findings might explain why oocyte collections were not as successful with her as with Fatu. This is why we came to the conclusion that the most valuable role for Najin is to be an ambassador for the conservation of her kind and to ensure that she can transfer her social knowledge and behaviour to offspring in the

In the face of Najin’s phase-out of the first pillar of the BioRescue programme (advanced assisted reproduction technologies, aART), its second pillar will become even more important. The aART relies on natural gametes for the creation of embryos, meaning that both the oocytes and the sperm have been collected directly from northern white rhino females and males. The stem cell associated techniques

(SCAT), the second pillar of the mission, strive to create artificial gametes from stored tissue of northern white rhinos. For example, tissue such as skin cells collected from Najin could be transformed into induced pluripotent stem cells that could then be reprogrammed to develop into artificial gametes (oocytes or sperm). This highly

advanced technique, within the BioRescue consortium developed by internationally leading teams from Kyushu University and the Max Delbrück Center for Molecular Medicine (MDC), allows to significantly increase the number of gametes available for embryo production and thereby can be a substantial multiplication factor.

Additionally, it greatly diversifies the genetic reservoir of the assisted reproduction programme. The SCAT are still beyond the cutting edge of rhino reproduction, but progress that has been made by the teams at Kyushu and MDC nourishes the hope that in the coming years northern white embryos could be created from lab-generated gametes. 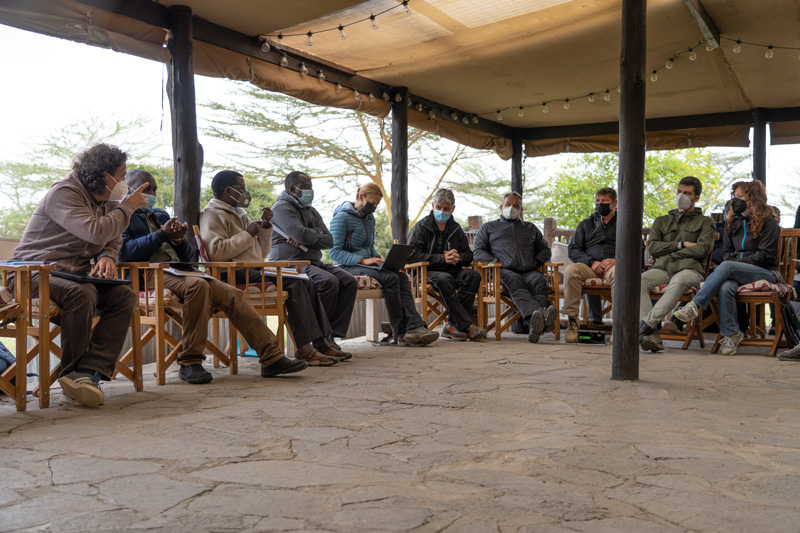 “The ethical risk assessment applied the best scientific approach aimed at safeguarding Najin’s welfare given her advanced age and the pathological signs in her uterus”, says Dr Patrick Omondi, Director, Wildlife Research and Training Institute (Kenya). “We are pleased to have participated in this assessment which affirms the collaborative and innovative approaches by the BioRescue Consortium in saving the species from extinction.”

Wildlife conservation has faced a multitude of challenges over the last decades and BioRescue has developed technologies that allow experts to tackle some of these.

The Government of Kenya collaborated with various partners to promote wildlife conservation by use of technological advances. The Northern White Rhino, though not native to the country, has found a home in Kenya.

“The Government through the Ministry of Tourism and Wildlife has committed itself to ensure that wildlife is conserved and managed for the present and future generations both in Kenya and globally and with a special focus on ensuring that endangered species do not face extinction. That Najin has not produced any viable ovum compounded by its advanced age, we have no choice but to accept the fate of having to retire her from the aART program.

We are however encouraged that she will be around long enough to have a positive impact on the next NWR generations through offspring from her daughter Fatu,” says Honourable Najib Balala, Cabinet Secretary, Ministry of Tourism and Wildlife, Kenya.

With the ever-increasing challenges rhino conservation is facing, the decision to retire Najin following expert advice on health considerations, advanced age and with no embryo successfully produced from the 10 oocytes harvested in three oocyte collections was a very difficult decision to make for Kenya Wildlife Service:

“We are however convinced that, as a Government agency mandated to conserve and manage the country’s wildlife, KWS has made significant contribution to the processes and efforts to save the Northern white rhino from extinction. We are also convinced that retiring Najin, though a difficult decision to make, is the only right option we have as we collaborate with technical experts both locally and internationally to explore opportunities presented by novel technologies of assisted reproduction techniques to save the species from extinction”, says Brigadier (Rtd.) John Waweru, Director General, Kenya Wildlife Service.

Description
The Leibniz-IZW is an internationally renowned German research institute of the Forschungsverbund Berlin e.V. and a member of the Leibniz Association. Our mission is to examine evolutionary adaptations of wildlife to global change and develop new concepts and measures for the conservation of biodiversity. To achieve this, our
scientists use their broad interdisciplinary expertise from biology and veterinary medicine to conduct fundamental and applied research – from molecular to landscape level – in close dialogue with the public and stakeholders. Additionally, we are committed to unique and high-quality services for the scientific community.
Read More Visit Website

Description
Kenya Wildlife Service is the principal government institution that conserves and manages wildlife for Kenyans and the world. It also enforces related laws and regulations.

Description
The Wildlife Research and Training Institute is a state corporation established under the Wildlife Conservation and Management Act No. 47 of 2013 to undertake and coordinate wildlife research and training through innovative approaches to enable provision of accurate and reliable data and information to inform policy formulation and decision making.

Description
Ol Pejeta Conservancy is the largest black rhino sanctuary in east Africa, and is the only place in Kenya to see chimpanzees. It is also home to the last two northern white rhinos on the planet. Ol Pejeta’s cutting-edge wildlife security includes a specialised K-9 unit, motion sensor cameras along its solar-powered electric fence, and a dedicated Rhino Protection Unit.
Read More Visit Website

Description
University of Padua in Italy is one of the oldest in the world, celebrating 800 years. Its Department of Comparative Biomedicine and Food Science is developing leading research and education in the field of wildlife conservation and welfare with a special focus on ethical assessment and evaluation of research projects and educational
programs developed by the Ethics Laboratory for Veterinary Medicine, Conservation and Animal Welfare.