In another exciting step towards the future of the northern white rhino, three more pure northern white rhino embryos have been created by the international team of scientists and conservationists working to save the species. This time, they were also able to use sperm from a different bull, improving the genetic diversity of the embryos.

On July 9th, the scientists and conservationists of Leibniz Institute for Zoo and Wildlife Research (Leibniz-IZW), Safari Park Dvůr Králové, Kenya Wildlife Service and Ol Pejeta Conservancy conducted already the sixth successful oocyte collection at Ol Pejeta. Immediately, after the oocyte retrieval the 17 eggs were airlifted to Avantea laboratory in Cremona, Italy, for maturation, fertilisation, embryo development and finally cryopreservation. Two embryos could be produced using semen from northern white rhino bull Suni, who has provided the genetics for all the embryos produced up this point. This time the specialists at Avantea were also able to use semen from Angalifu, a northern white rhino bull who lived in San Diego and died in 2014. His sperm was previously thought to be incapable of successfully fertilizing eggs. However, after screening different batches of the semen utilizing pig oocytes, the scientists were able to identify a suitable batch and used it to obtain another first grade embryo. This excellent result adds the genetics of a completely unrelated individual to the cryo-preserved population, and boosts the odds for the embryo during transfer. 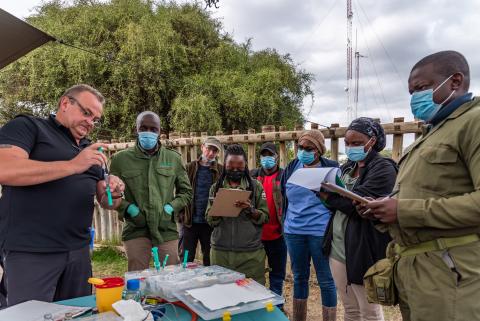 In a discussion prior to the ovum pick up of July 9th, the team decided not to performan oocyte collection on Najin, the older of the two remaining northern white rhinos. Her future role in the scientific programme, from an ethical perspective, will be considereddiscussed in the coming weeks from an ethical perspective and a science-backed decision will be announced. So far, none of the oocytes obtained from Nájin have been of sufficient quality for turning into viable embryos; all 12 embryos produced up to this point used oocytes from Najin’s daughter Fatu.

As retiring one individual of only two left is a serious matter from the conservation point of view, this decision will be reached in a thorough, scientific assessment among all partners and by taking into account all relevant ethical perspectives.In further developments on the ground in Ol Pejeta, the preparation of the embryo transfer enters the crucial phase. Two southern white rhino females were moved into the enclosure with Owuan, the sterilised southern white rhino bull who is serving as the oestrus detector for the females as they come into season. The team is carefully monitoring the welfare of all the animals and will start to observe and record their behaviour and also vocalizations in preparation for the first embryo transfers which are likely to begin by the end of the year. 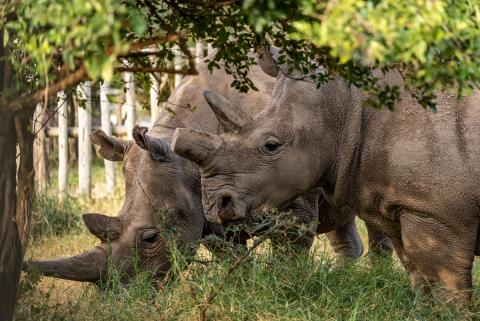 The BioRescue research programme, significantly funded by the German Federal Ministry of Education and Research (BMBF) and additional donors such as foundation Nadace ČEZ, the philanthropist Dr Richard McLellan, Merck EMD foundation and GE HeathCare, will continue with its ambitious plan to create more embryos from oocytes collected from the northern white rhino females in a three to four-month cycle as long as the COVID-19 pandemicallows for the team to travel to Kenya. With the relocation of surrogates completed, a successful embryo transfer is the next main step the BioRescue team aims at.

Quotes
Description
Once again, the use of knowledge coming from livestock species has helped to identify a batch of Angalifu semen that could eventually be used to produce viable embryos. We are impressed by the number of embryos obtained from the 17 oocytes given the paucity of eggs and the quality of the semen. It also indicates that conducting the procedure on a regular basis is not only harmless to Fatu but also raises the number of embryos that could obtained.
Name
Prof. Cesare Galli
Position
Director
Description
Najin is now 32. During the recent procedures it became clear that her ovaries do not produce large number of eggs anymore, and that their quality is compromised. She is an old lady and it seems it’s not worth subjecting her to the stress of any further procedures. However, her health status will be frequently monitored.
Name
Jan Stejskal
Position
Director of International Projects at Safari Park Dvůr Králové
Description
We are very pleased with the progress of our ambitious scientific rescue program for the northern white rhino," says BioRescue project leader Prof. Thomas Hildebrandt from Leibniz-IZW. "The total of 12embryos, including the first embryo of the northern white rhino bull Angalifu, as well as the successful relocation of the two potential surrogate mothers into Owuan's enclosure show the quality of this joint project. We are now focusing on the first embryo transfer in the coming months.
Name
Prof. Dr. Thomas Hildebrandt
Position
BioRescue project head and head of Department of Reproduction Management
Boilerplates

Description
The Leibniz-IZW is an internationally renowned German research institute of the Forschungsverbund Berlin e.V. and a member of the Leibniz Association. Our mission is to examine evolutionary adaptations of wildlife to global change and develop new concepts and measures for the conservation of biodiversity. To achieve this, our scientists use their broad interdisciplinary expertise from biology and veterinary medicine to conduct fundamental and applied research – from molecular to landscape level – in close dialogue with the public and stakeholders. Additionally, we are committed to unique and high-quality services for the scientific community.
Read More Visit Website

Description
Safari Park Dvůr Králové is a safari park in the Czech Republic. It’s one of the best rhino breeders outside of Africa and the only place where the northern white rhino bred in human care - both remaining females, Najin and Fatu, were born here. Safari Park Dvůr Králové coordinates efforts to save the northern white rhinos.
Read More Visit Website

Description
Kenya Wildlife Service (KWS) is a state corporation that was established by an Act of Parliament (Cap 376), now repealed by WCMA (2013), with the mandate to conserve and manage wildlife in Kenya, and to enforce related laws and regulations. KWS undertakes conservation and management of wildlife resources across all protected area systems including community conservancies in collaboration with stakeholders.
Read More Visit Website

Description
Ol Pejeta Conservancy is a 90,000-acre wildlife conservancy working to conserve wildlife, to provide a sanctuary for great apes and to generate income through wildlife tourism and complementary enterprises for re-investment in conservation and community development. It is a key conservation area in the wider Laikipia ecosystem and aims to manage sustainable, diverse and healthy wildlife populations in an integrated wildlife and livestock system. Ol Pejeta Conservancy is the largest black rhino sanctuary in east Africa and is the only place in Kenya to see chimpanzees. It is also home to the last two northern white rhinos on the planet. Ol Pejeta’s cutting-edge wildlife security includes a specialised K-9 unit, motion sensor cameras along its solar-powered electric fence, and a dedicated Rhino Protection Unit. Ol Pejeta also integrates livestock with wildlife – both as a means to earn revenue for conservation but also as a rangeland management tool.
Read More Visit Website

Description
University of Padua in Italy is one of the oldest in the world, celebrating 800 years. Its Department of Comparative Biomedicine and Food Science is developing leading research and education in the field of wildlife conservation and welfare with a special focus on ethical assessment and evaluation of research projects and educational programs.
Read More Visit Website