In August 2019 a team of scientists and conservationists broke new ground in saving the northern white rhinoceros from extinction. They harvested eggs from the two remaining females, artificially inseminated those using frozen sperm from deceased males and created two viable northern white rhino embryos. With great support from the Kenyan Government and in the presence of Hon Najib Balala, – Kenya’s Cabinet Secretary, Ministry of Tourism and Wildlife – the team repeated the procedure on December 17, 2019, and was able to create a new embryo over Christmas. This significantly increases the chances of successfully producing offspring. The procedure has proven to be safe and reproducible, and can be performed on a regular basis before the animals become too old. Preparations for the next steps of the northern white rhino rescue mission are underway.

The Leibniz-IZW team during the second egg collection. | Photo by Amy Vitale

Four months after the ground breaking first “ovum pickup” in August 2019, the team repeated the procedure with northern white rhinos Najin and Fatu on December 17, 2019, at Ol Pejeta Conservancy in Kenya. The animals were placed under general anaesthetic and nine immature egg cells (oocytes) – three from Najin and six from Fatu – were harvested from the animals’ ovaries using a probe guided by ultrasound. The anaesthesia and the ovum pickup went smoothly and without any complications. The oocytes were transported immediately to the Avantea Laboratory in Italy. After incubating and maturing nine eggs, four from Fatu and one from Najin were fertilised with sperm using a procedure called ICSI (Intra Cytoplasm Sperm Injection). One out of five eggs from Fatu fertilized with semen from Suni developed into a viable embryo with the help of Geri®, an innovative benchtop incubator with integrated continuous embryo monitoring capabilities designed to provide an individualized and undisturbed incubation environment, donated by Merck. The embryo is now stored in liquid nitrogen along with the two embryos from the first procedures.

“This is a big win for Kenya and its
partners, as the northern white rhinos are faced with the threat of imminent extinction”
— Hon. Najib Balala

Hon. Najib Balala, Cabinet Secretary for Kenya’s Ministry of Tourism and Wildlife, said: “As a government, we are glad that the northern white rhino in-vitro fertilisation project by a consortium of scientists and conservationists from Kenya, Czech Republic, Germany and Italy collaborative partnership has been able to successfully produce three pure northern white rhino embryos ready for implantation into southern white rhino as surrogate mothers in coming months. This is a big win for Kenya and its partners, as the northern white rhinos are faced with the threat of imminent extinction, where only two of them, females Najin and Fatu, are left in the whole world and are currently hosted by Kenya. 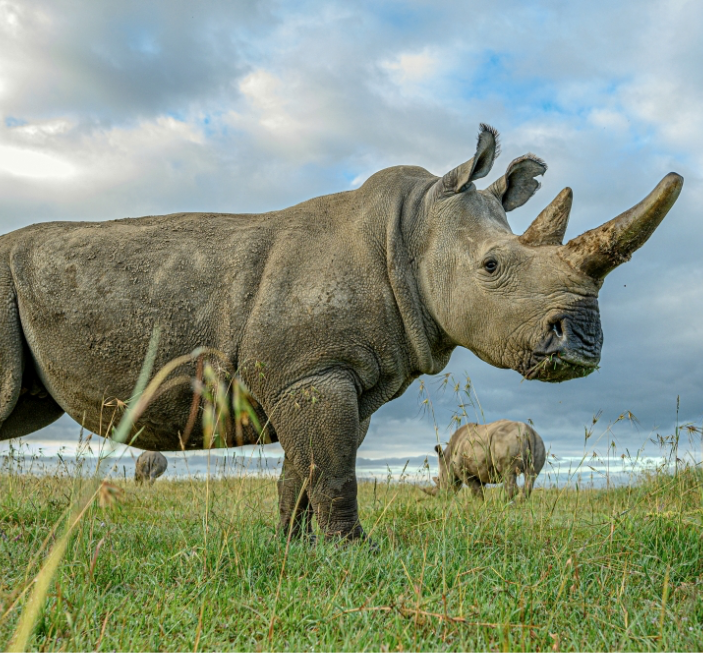 Fatu at the Ol Pejeta Conservancy. | Photo by Amy Vitale

It’s a delicate process for that, we thank the concerned parties, the Kenya Wildlife Service, Ol Pejeta Conservancy, Leibniz Institute for Zoo and Wildlife Research, Avantea Laboratory and Dvůr Králové Zoo, for putting in all of their efforts in ensuring that the critically endangered species do not disappear from the planet under our watch. I urge the scientists to continue digging deeper into technology and innovations to ensure that not only this concerned species does not go extinct, but other species that are faced with similar threats. The fact that Kenya is at the centre of this scientific breakthrough also makes me very proud. It’s amazing to see that we will be able to reverse the tragic loss of this subspecies through science.” 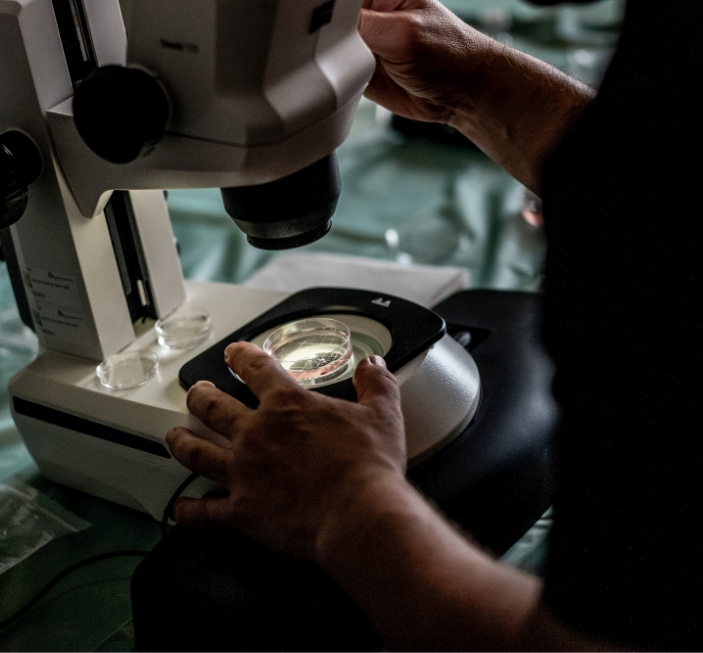 Analysation of the eggs after the collection. | Photo by Justin Mott 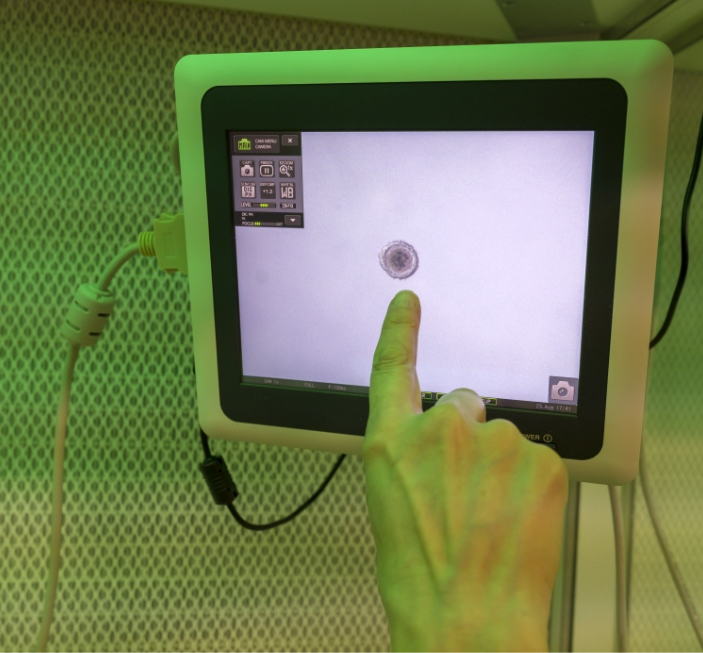 The fertilized egg in the laboratory at Avantea. | Photo by Amy Vitale

In December 2019, the team also transported the semen of Sudan, the last northern white rhino male that died in March 2018, from Kenya to Germany. The aim is to use it in future for production of more embryos. However, as the semen was collected in 2014 when Sudan was already over 40 years old, it is necessary to test it first and then see whether it could be used for such purposes. 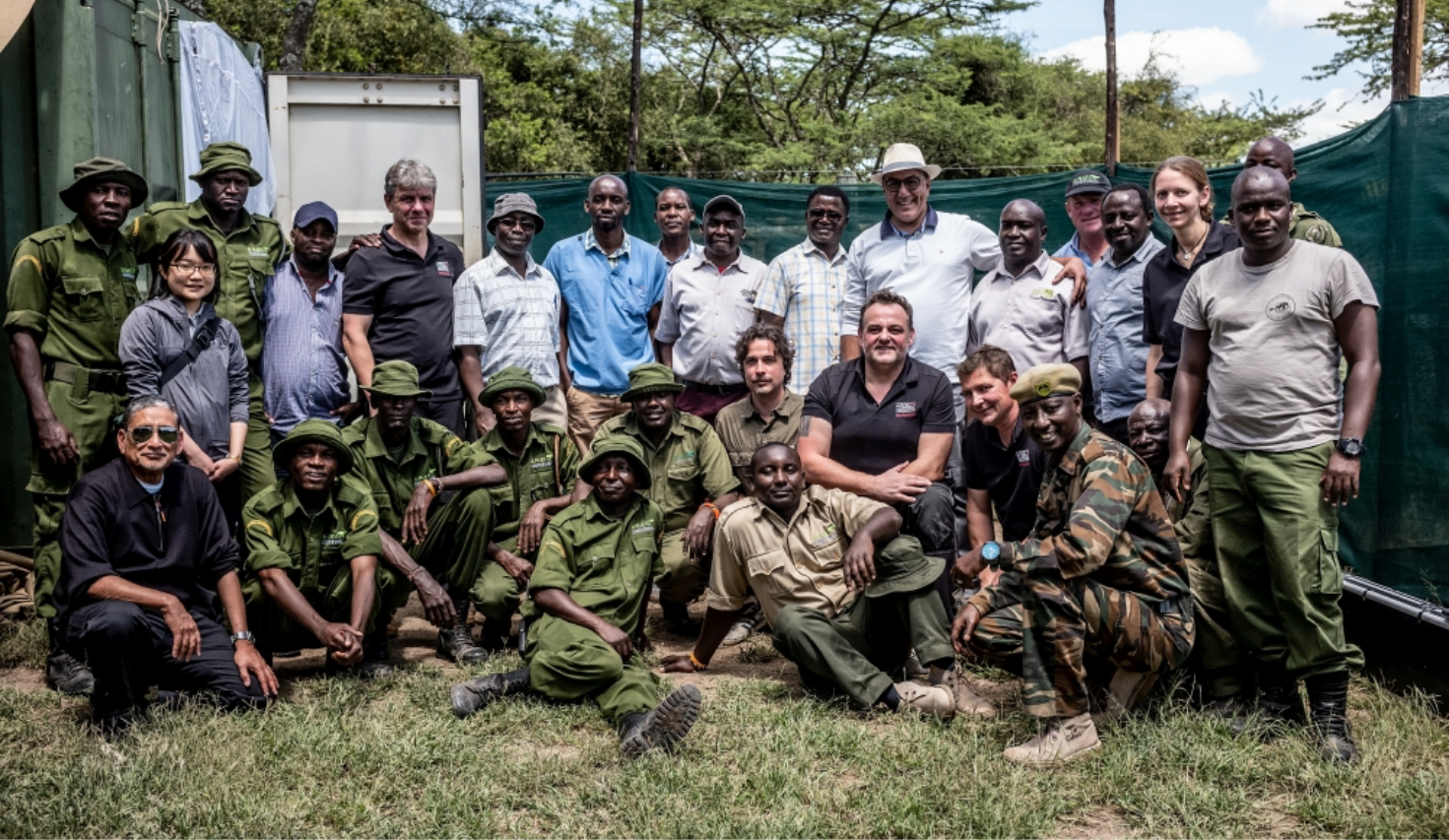 Parts of the BioRescue consortium at the Ol Pejeta Conservancy, Kenya. | Photo by Amy Vitale

The egg collection, embryo creation and preparation for the embryo transfer is a joint effort by the Leibniz Institute for Zoo and Wildlife Research (Leibniz-IZW), Avantea, Dvůr Králové Zoo, Ol Pejeta Conservancy and the Kenya Wildlife Service (KWS). The entire process is part of the “BioRescue” research. Its goal is to significantly advance assisted reproduction techniques (ART) and stem cell associated techniques (SCAT) complemented with a comprehensive ethical assessment carried out by the University of Padova for the benefit of the northern white rhinoceros. The consortium is partially funded by the German Federal Ministry of Education and Research (BMBF) and comprises of internationally renowned institutions from Germany, Italy, Czech Republic, Kenya, Japan and USA.

Downloads
File name
Media Package “Newly Created Embryo…”
File
just1.zip
Quotes
Description
Our repeated success in generating a third embryo from Fatu demonstrates that the BioRescue program is on the right track. Now, the team will make every effort to achieve the same result for the 30-year-old Najin before it is too late for her. We are strongly committed to our plan to transfer a northern white embryo into a surrogate mother in 2020 to ensure the survival of the northern white rhino.
Name
— Thomas Hildebrandt
Position
BioRescue project leader and Head of the Department of Reproduction Management, Leibniz-IZW
Description
We don’t know how many embryos we will need to achieve a successful birth of a new northern white rhino calf. That’s why every embryo is so important and why a long-term cooperation between scientists, experts in zoos and conservationists in field is a crucial element if we want to give hope to a species that would otherwise go extinct in few years.
Name
— Jan Stejskal
Position
Director of Communication and International Projects, Safari Park Dvůr Králové
Description
Having produced another embryo again from Fatu and none from Najin indicates that we cannot waste more time as aging of the animals is not a favourable condition.
Name
— Cesare Galli
Position
Director of Avantea
Description
We have taken yet another small step along the road of saving the northern white rhino from extinction. We have a long way to go and success is far from assured, but Kenya continues to play her part at the centre of a multi-national collaboration to save this species. Let us hope for news of a successful northern white pregnancy in the not too distant future.
Name
— Richard Vigne
Position
Managing Director, Ol Pejeta Conservancy
Description
We are thrilled at the two successful ovum pick-ups and the subsequent creation of embryos which together mark crucial milestones in the ambitious race to save the majestic Northern White Rhino species from imminent and irreversible extinction. We are delighted at the steady progress every time such a step is made. The more than decade-long journey Kenya has walked as part of an international collaborative rescue mission is a strong testament to what can be achieved when humanity comes together in a collaborative approach. We remain upbeat at the prospects of the groundbreaking efforts to revive the Northern White Rhino from disappearing from the planet. Kenya Wildlife Service reiterates her commitment to the partnership contributing to this historic initiative that’s pushing the frontiers of science.
Name
— Brig (Rtd) John Waweru
Position
Director General, Kenya Wildlife Service
Description
Like the previous ones, even this new embryo has been created under a rigorous ethical assessment of all procedures involved, taking care of the welfare of Najin and Fatu in all aspects. All the stakeholders involved participated in the ethical assessment, confirming the importance to carry on with this project in order to give the two northern white rhino females a chance to rise their offspring and hopefully save their species.
Name
— Barbara de Mori
Position
Director of the Ethics Laboratory for Veterinary Medicine, Conservation and Animal Welfare – University of Padua
Description
It’s a privilege to support the mission to save the world’s most endangered mammal with our expertise and world-leading technologies. We are excited that a viable, Northern White Rhino embryo has developed with the help of our Geri® incubator.
Name
— Jan Kirsten
Position
Head of Global Business Franchise for Fertility, Merck
Description
The additional embryo is a remarkable success. The worldwide public awareness of our conservation research is very important. Media and people show that they care about nature. We hope that supporters will contact us directly to be part of the endeavour of saving the northern white rhinos from extinction.
Name
— Steven Seet
Position
BioRescue project management and Head of Science Communication Office, Leibniz-IZW
Boilerplates

Description
Leibniz Institute for Zoo and Wildlife Research (Leibniz-IZW) is an internationally renowned German research institute of the Forschungsverbund Berlin e.V. and a member of the Leibniz Association. Our mission is to examine evolutionary adaptations of wildlife to global change and develop new concepts and measures for the conservation of biodiversity. To achieve this, our scientists use their broad interdisciplinary expertise from biology and veterinary medicine to conduct fundamental and applied research – from molecular to landscape level – in close dialogue with the public and stakeholders. Additionally we are committed to unique and high quality services for the scientific community. www.izw-berlin.de
Read More Visit Website

Description
Ol Pejeta Conservancy is the largest black rhino sanctuary in east Africa, and is the only place in Kenya to see chimpanzees. It is also home to the last two northern white rhinos on the planet. Ol Pejeta’s cutting edge wildlife security includes a specialised K-9 unit, motion sensor cameras along its solar-powered electric fence, and a dedicated Rhino Protection Unit.
Read More Visit Website

Description
University of Padua in Italy is one of the oldest in the world, celebrating 800 years. Its Department of Comparative Biomedicine and Food Science is developing leading research and education in the field of wildlife conservation and welfare with a special focus on ethical assessment and evaluation of research projects and educational programs.
Read More Visit Website