The Sumatran Rhino and the Northern White Rhino are on the brink of extinction. Only a few days ago the last Sumatran Rhino in Malaysia, Iman, died after severe illness. Thomas Hildebrandt performed one of the last health assessments on Iman and attempted at collecting oocytes for assisted reproduction. He and his colleagues from the Leibniz Institute for Zoo and Wildlife Research want to help the remaining individuals of both Sumatran and Northern White Rhino to have offspring. In an interview with National Geographic Germany, Hildebrandt talks about assisted reproduction techniques for rhinos and disagreements within the IUCN about how to save endangered species. The interview was published on October 25, 2019 – only four weeks before Iman's death.

Mr Hildebrandt, you recently went to Borneo and collected an egg cell from Malaysia's last surviving Sumatran rhino. How is Iman?

She is seriously ill. She has a bladder tumour, strong abnormalities in the uterus and will not live much longer. We were only able to extract one egg from her, which unfortunately degenerated within a few days after fertilization. Hopefully there will be time this winter to try again.

How do you extract an egg from a rhinoceros?

My colleague Frank Göritz is performing the anaesthesia together with local veterinarians. With the northern white rhinoceroses and the Sumatran rhinoceros, you cannot get any further with conventional equipment, because they all have tumours that prevent the eggs from being removed through the vagina. The risk of injuring the animal would be too high. The rhinoceroses have veins as strong as children's arms, so you should never stab them. Instead, you have to find the ovaries through the intestines and suck out the ova. The needle we use for this is a whole meter long.

Can you apply knowledge from human medicine or the livestock sector?

No, only the work in the laboratory is similar. Our work is extremely specialized, particularly when it comes to oocyte collection and embryo transfer back to the animal. We are the only ones in the world who have the expertise to safely carry out an egg collection in wild animals – only we conduct the corresponding basic research.

Is there international agreement on how to preserve the species?

This summer, the International Union for Conservation of Nature (IUCN) held a meeting on the future of the Sumatran rhino. It is not only its own species, but also its own genus. A whole genus has not left our planet for a long time. This has prompted the IUCN to act. We sat together with our international colleagues from Malaysia, Indonesia and the USA, but unfortunately the opinions about the protection are very different. 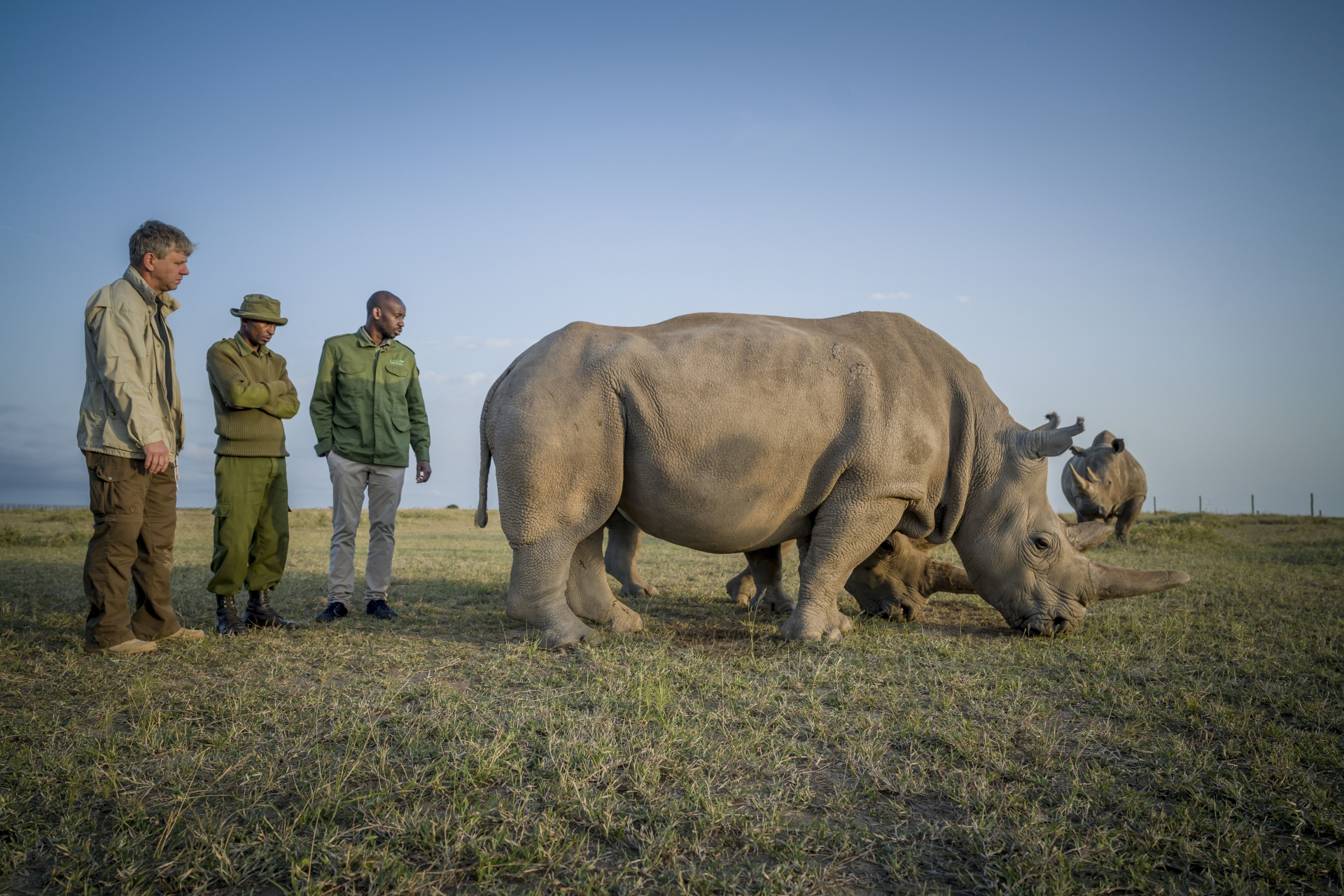 What are the different points of view?

Some say that natural breeding is the way to save these animals. For a long time, the predominant opinion was that the only thing to do was to protect their habitat. This turned out to be fatal because individual animals were kept alive in this way, but no offspring were promoted. The female animals that live alone in this protected habitat all suffer from tumours and uterine cysts because they have no breeding partner and no calves. Iman for example came out of the wild with tumours almost the size of a football, because she had no offspring for at least ten years. Habitat protection must not be the one and only doctrine. In vitro fertilization is the single most important step in the conservation of endangered species.

You and your partners have produced two embryos from the oocytes from the Northern White Rhinos. How are the last two animals of their kind?

They got up after egg collection, ate and took a mud bath. With this demonstration we have cleared many prejudices and concerns out of the way in Kenya. Kenya Wildlife Service has provided us with a helicopter to transport the egg cells to the international airport as quickly as possible. We were able to freeze two excellent blastocysts and hope that this rethinking will continue.

You can read the complete interview by Andrea Henke for National Geographic Germany (only in German) on the website https://www.nationalgeographic.de/tiere/2019/10/vitro-befruchtungen-sind-der-wichtigste-schritt-zum-erhalt-bedrohter-arten.

Follow our story, spread the word, and consider donating for sustaining the hope for the Northern White Rhino: https://donorbox.org/biorescue.